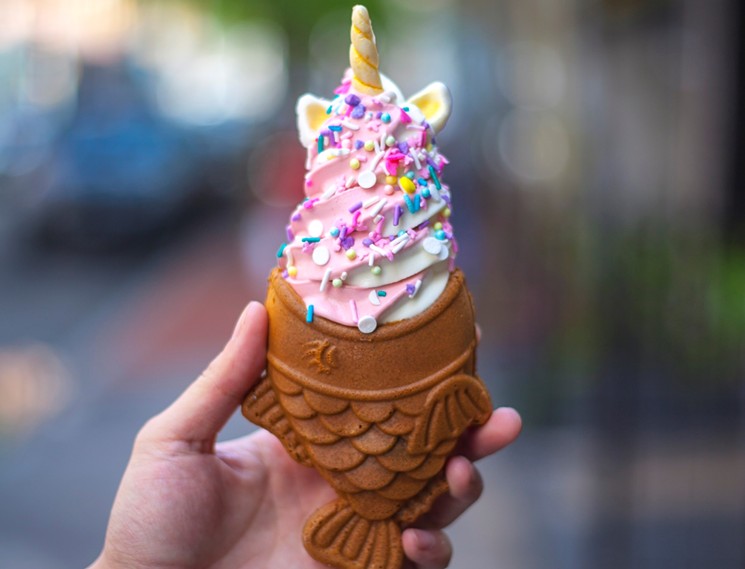 As temperatures soar, Miamians can’t help but crave a scoop of ice cream. And though some people consider this cold, creamy blend a special treat, locals deem it a necessity. From Serendipity in Wynwood to Nanndi in Downtown Dadeland, your neighborhood ice-cream parlor is a sanctuary for the scorching heat and relentless humidity.

2. Serendipity. Owned by Jessica Levison, Serendipity sells a selection of signature creams ($5 to $7), such as salted caramel, pecan pie, and lavender orange, along with beer floats made with local brews. Most of Levison’s flavors, however, are in constant evolution, meaning no visit to her shop is the same. Depending upon the day, customers might find flavors such as blood-orange sorbet or white Russian with candied hazelnuts. 9457 Harding Ave.,Surfside; 305-865-1506; serendipityyogurtcafe.com.

3. Aubi & Ramsa. The space, for patrons aged 21 or older, offers frozen treats infused with various spirits, from tequila and rosé to vodka, gin, and red wine. Try Macallan 12-year single-malt Scotch blended with a creamy Belgian chocolate cream ($7 to $10), or a serving of Moët & Chandon Imperial Brut balanced with a light tangerine sorbet. Then there’s the Kentucky Crème Brûlée, an organic vanilla-pudding ice cream made with Four Roses single-barrel bourbon and caramelized sugar sprinkles. A 3.7-ounce serving contains about 4.9 percent ABV and will set you back about $9. 172 NE 41st St., Miami; 305-946-9072; aubiramsa.com.

4. Sweet Melody. At Sweet Melody, flavors such as Brie and apricot, pecan and bourbon, lemon ginger, and blueberry cheesecake are just a smattering of the more than 100 varieties owner/creator Mike Romeu has developed over the years. All of his flavors are free of GMO sweeteners and hormones and use high-quality local ingredients when possible. He’s involved with each batch from start to finish, crafting everything from the cream to its infusions by hand, keeping in line with Sweet Melody’s artisanal practices. Find Sweet Melody at the Wharf Miami, as well as various restaurants in town, including Coral Gables’ Caffe Vialetto, Ghee Indian Kitchen in Downtown Dadeland, and No Name Chinese in South Miami. The Wharf Miami, 114 SW North River Dr., Miami; 305-906-4000; wharfmiami.com.

5. Lulu’s Nitrogen Ice Cream. In 2013, Luisa Santos was studying political economy at Georgetown University when she learned a surprising fact: Ice cream could be made from scratch using liquid nitrogen. Today her hunger for running a business and producing quality ice cream has led her to create one of Miami’s best purveyors of frozen treats. The way it works is you choose a base ($5 for two scoops), which Santos emphasizes has been made in-store from scratch. Then it’s frozen right in front of you. Flavors rotate frequently and according to what’s in season at the farms in Homestead. But fear not — classics such as chocolate, vanilla, and the popular Nutella will always be available. More creative options might include strawberry basil or honey lavender, and there will always be at least one vegan choice, such as avocado. All of the dairy used is local and comes from the shop’s very own adopted cow. Her name, of course, is Lulu. 2001 Biscayne Blvd., Miami; 202-644-3802; lulus-icecream.com.

6. Azucar Ice Cream Company. When strolling along Calle Ocho in the afternoon, nothing satisfies like a scoop of something cold. So pop into Azucar Ice Cream Company, where you’ll find flavors that could be dreamed up only in Miami. Located in the heart of Little Havana, this shop has long served frozen sweets with Cuban flair. Instead of downing scoops ($3 to $5) of French vanilla and bubblegum, you’ll savor flavors such as café con leche, plátano maduro (sweet plantain), and Abuela María (vanilla ice cream with ripe guava, chunks of cream cheese, and crushed Maria cookies). There’s also the Burn in Hell, Fidel! — which was created days after the announcement of Castro’s death — featuring chocolate ice cream with a kick of cayenne. 1503 SW Eighth St., Miami; 305-381-0369;azucaricecream.com.

8. Taiyaki. Famous for its fish-shaped cones and exotic-flavored ice creams, Taiyaki has taken Miami by storm with the most adorable and photogenic treats known to mankind. For $8, the fish-shaped cone is filled with red bean paste and topped with a soft-serve swirl. Special editions such as unicorn, Christmas tree, and Easter bunny cones are available seasonally. 143 NW 23rd St., Miami; 305-768-9826; 1-800-lucky.com.

9. Cream Parlor. Cream Parlor, a sky-blue ice-cream shop and café on the Upper Eastside, is the progeny of husband and wife Johnny and Ainsley Tsokos, who dreamed of sharing their favorite foods with the public in a quaint, vintage-style space. Besides offering a menu filled with salads and sandwiches, which are served on Zak the Baker bread, Cream Parlor is best known for its selection of house-made ice cream and desserts ($3 and up). Don’t pass up a few scoops of pastelito cheesecake or the Prince-inspired Purple Rain, covered with berries and dark chocolate. 8224 Biscayne Blvd., Miami; 786-534-4180; creamparlor.com.

10. The Frieze Ice Cream Factory. This shop has been a staple for 30 years in South Beach, where it whips up homemade and uniquely named flavors ($3 and up) such as Sassy Strawberry, Perfect Pistachio, Jack Daniel’s Maple Walnut, and Get Down Boogie-Oogie Cookie. The Frieze also offers rich-tasting sorbets. The dozen or so flavors, including watermelon and passionfruit, are refreshing but not too watery, and tart but not too tangy. If you’re feeling fancy, ask for the crowd favorite: champagne sorbet. 1626 Michigan Ave., Miami Beach; 305-538-0207; thefrieze.com.